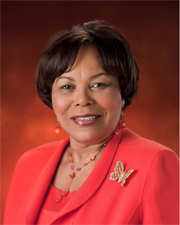 Melba Beverly Lorraine Simmons Patterson is a west coast native. Los Angeles, California is where she was educated and served as an active member of the Mount Zion Missionary Baptist Church.

January 1970 Melba moved to Houston, TX to partner in ministry with her husband/pastor at the historical Mt. Corinth Missionary Baptist Church. Melba serves this congregation with various gifts and talents. She is Superintendent of the Young AdultSunday School Class, Leader of the Youth Usher Department, Secretary of the Adult Vacation Bible School Class, Sunday School Teacher and Charter-Member of S.W.A.T. (Soul Winner’s Action Team) which is a ministry that goes out monthly beyond the walls of the church to share the witness ofChrist to the world. She  served as Director of Haiti Mission Vacation Bible School sponsored by Mt. Corinth Missionary Baptist Church.

Melba’s passion is to empower women. She speaks into the lives of women across the country as well as global ministry exposure in Europe, Asia, Africa, Bahamas, Bermuda and other countries around the world. 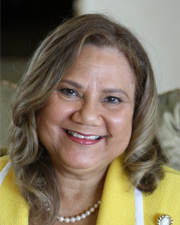 Jacqueline Dotson Chaney is a native Houstonian. She is a 1965 graduate of Evan E. Worthing High School and also attended the University of Houston, where she met her husband, Don Chaney. They have been married for forty one years and are proud parents of three children, Michael Chaney, Donna Chaney and Kara Chaney Carter. She also has eleven grandchildren and plays a very active role in each of their lives.

Jackie is first and foremost a devoted wife and mother. She has successfully established a nurturing home atmosphere by always being there for her family. She worked and participated in all their school systems. Her pet projects included volunteering with Fine Arts programs, classroom assistance and numerous fundraising projects.

Jackie has worked with the National Basketball Association Wives Organization, visiting the National Institute of Health in Washington D.C. to promote breast cancer awareness. She also participated in activities for The Sunshine Kids here in Houston where she interacted with terminally ill children, providing entertainment and support.

Together Jackie and Don have raised funds for the United Negro College Fund, hosting a gala in their home. They have also chaired a project to help raise money for Muscular Dystrophy.

Jackie is an avid collector of black art and because of this interest she has promoted, hosted and chaired various art exhibits showcasing black artists. In addition, she co-chaired the Houston Art League’s Artist of the Year affair in 1991.

Jackie and Don have lived in various parts of the country due to Don’s professional basketball career. However, since his retirement, they have moved back to Texas and now reside in Katy. Since returning, they have become members of the Church Without Walls. Jackie has now been able to pursue her interest in traveling, taking extensive vacations and cruising to exotic locations. She stays busy with hobbies including cooking, gardening, fishing, reading and especially entertaining her family and friends. 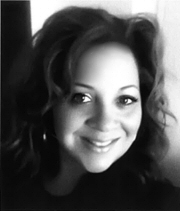 Audrey Marie Cosby’s passion in life is to be a blessing to her family, church, community and the world. She is a committed mentor who seeks to make a difference in the lives of others by enriching the lives of young girls in the Girls Rites of Passage Program. Her genuine love for people positioned her as president of the Family Connection Corps, which provides fellowship meals to bereaved families. Audrey also serves as an advisor to the Women’s Ministry in her congregation.

She is a Board member of the Central City Comprehensive Community Center, a nonprofit organization committed to the promotion of social services in the Third Ward community. On any given Sunday Audrey can be found in the church nursery showing love to the young babies and toddlers. Audrey is the mother of four daughters and one son. She is the First Lady at Wheeler Avenue Baptist Church where her husband Dr. Marcus Cosby is Sr. Pastor.